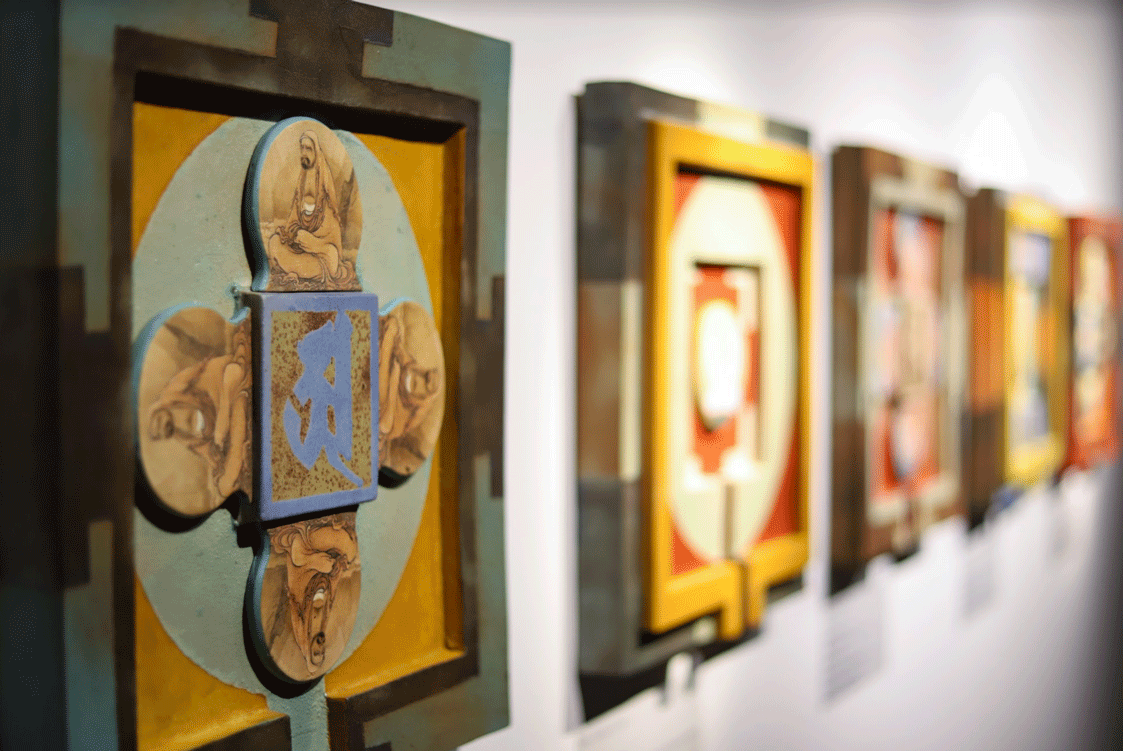 This verse from the Taittiriya Upanishad articulates an ancient Indian theory of the evolution of life on earth beginning with the five elements — space, air, fire, water, earth— emerging sequentially and gradually giving rise to plant life, food and ultimately, humans. Visualising and understanding this emergence of life, its nature and sustenance continues to instil wonder in us today. Every element is associated with a certain sensory perception. Of all the elements, Earth seems to bring together all five senses- sight, sound, taste, smell and touch. This might explain the natural affinity children have for playing with mud and the deep connection humans have felt with the earth for millennia.

It is also speculated that our ability to imagine and weave stories has contributed significantly to ensure the survival and dominance of the human species over the rest. Many of our mythological narratives feature the key role played by the elements; fire, wind, water and earth often personified into deities; or characters who hail from a lineage of these elements. There is no dearth of imagination in these stories for creating alternative realms and flights of fantasy. Our imaginative capacity also relies on rationale as we put together fragments of terracotta remains, broken ceramics and other material found from archaeological excavations as evidence to imagine, study, test, research and analyse our possible histories.

While it can be argued that ‘art’ in its myriad contemporary forms may not necessarily be recognised or appreciated across diverse social and economic cultures, pottery however has the undeniable recognition of being fundamental to human life for thousands of years in every civilisation that has emerged on earth. An artist choosing to work with ceramics and pottery today therefore has a plethora of histories to draw knowledge from and extend them further through their own personalised techniques and practices. Elements in Mythology brings together the worlds of some of India’s finest artists working with ceramics presenting examples of both functional pottery as well as sculptural objects.

It is difficult to imagine the evolution of the ceramics department in the Faculty of Fine Arts at M.S.University of Baroda without the contributions of Ira Chaudhary and Jyotsna Bhatt in learning, innovating and teaching a variety of techniques they themselves were exposed to through traditional potters and contemporary ceramic artists. A studio potter for seven decades now, Ira Chaudhary (who is currently in her nineties) has been creating artworks with the belief that pottery must continue to be part of our everyday living and prefers that her pieces are functional and accessible to the masses. The simplicity of this approach reflects the foundational philosophy and vision prevalent in the 1950s by the founders and senior teachers of the Faculty of Fine Arts. Direct interaction and exposure to folk traditions and artists was part of the learning environment in those days and the influence of tribal art continues to be visible in Ira Chaudhary’s work. Her palette is striking even in its muted earthy tones, embellished with intricate patterns and “Iramese” texts (an imaginary script she creates) in her characteristic sgraffito technique. This is a technique of layering different colours or glazes on a leather-hard clay body and then ‘scratching’ off parts of it to allow the contrasting under-layers to become visible.

A photograph of Jyotsna Bhatt managing a stall during the Fine Arts Fair in the Faculty of Fine Arts Baroda, epitomizes the educational and cultural ethos of the first few decades of the Faculty of Fine Arts. A student of Sankho Chaudhary, Jyotsna Bhatt’s work also relates to the everyday from the perspective of nature— animal and floral forms being her central focus. There is a toy-like quality in her animal forms but their gaze and postures draws our attention to contemplate on our own human emotions and everyday existence— is it really the cat that is smug? Do its stripes imply an otherworldliness… or is the intent gaze of the owl reminding us that we are being watched not only by other humans but other species as well? Her unique matte glazes and hues in teal, earthy greens and rich greys evoke an inner vibrance that nudges us towards a visual aesthetic that stands stoically in contrast to the noisy glitz and bling we are surrounded by.

For more than half a century, the city of Baroda has itself been a kiln for artists (the blistering summers further supporting the metaphor), providing them with a conducive environment to form their own individual expressions. Vinod Daroz belongs to a generation of ceramicists based in Baroda, who studied under Jyotsna Bhatt. His upbringing in a traditional jewellers’ family in infuses his work with a tendency towards ornamental embellishment as well as a keen sense of refinement and detail. His technical mastery can trick a viewer into perceiving metal, stone and wood while all the while looking at carefully crafted porcelain. In Ode to Shloka-1 each form echoes the other creating a rhythmic chant of white porcelain, gold and platinum. Vinod has been interested in forms associated with the Indian tantric traditions like the lingam and yoni as well as other forms and symbols related to religious iconography, or even his affinity for repetition. However, these forms are removed from their symbolic specificity and take on new meanings through his sculptural explorations and vibrant glazes.

The thread of Indian spirituality runs in the works of Vineet Kacker as well. As an architecture graduate in the eighties, he grew interested in ceramics through the Andretta Pottery studio in Himachal Pradesh. His exposure and training continued further at Golden Bridge Pottery at Pondicherry where he assisted Ray Meeker with his Fired-Earth Housing projects. Vineet’s background as an architecture graduate influences his interest in observing and understanding how the sacred and profane converge in everyday spaces— the emergence of street-side shrines, the symbolism behind the structure of stupas and temples— as well as the spiritual beliefs, symbols and practices in the Himalayan regions. In the series tied Myth-Mandalas, he creates poetic compositions that represent the five elements. Even though we may interpret the Mandala to house these myths, one wonders whether the myths are in fact larger containers of imagined ideas, lending a narrative tactility to our perceptions of the elements that make up our universe.

Just as a Mandala symbolically represents the boundary of an abstract container, maps have historically served as illustrations of principles related to the earth’s topography and diverse knowledge systems. Mappa Mundi, as they were known in medieval Europe, were almost treated as encyclopaedic resources till their function specifically demanded geographical accuracy for navigational purposes. Madhvi Subrahmanian creates her personalised Mappa Mundi as she maps her routine journeys in the two cities she inhabits, Mumbai and Singapore. A trace could also imply a memory and therefore the intersecting routes and pathways across curved discs of varying sizes represent not just the artists journeys over the surface of the earth but also the journeys within one’s mind. In Forest, the artist provokes the viewers to reflect on the evolving nature of urban spaces through her sculptural forms. This work evokes a curious organic morphing of high-rise buildings into lanky trees almost willing a magical transformation of concrete jungles into lush forests.

In the natural cycle of life that has emerged on earth, the elements have each nurtured every living species; giving rise to new life even in death. In Savia Mahajan’s work the binaries of life and death are contemplated not just conceptually but also through her work process. In Lithified Lives for instance, the artist retains traces of books as palimpsests created on clay, fired at high temperature. The book burns away but not before leaving its trace impressed on a surface much harder but also delicate and brittle. The process is almost cathartic for today’s information-overload and our preoccupation with documenting every thought in word and image. There is also value in dwelling on transient states before identities are clearly formed and this is visible in her series titled Liminal Entities where the artist creates highly textured surfaces in porcelain mixed with paper and other fibres to create organic forms that seem to pulsate with life, or that might perhaps be decomposing gradually into nothingness.

Reyaz Badaruddin’s works have a playful take on the history of pottery being associated with functionality. Over the last decade, he has carried out different explorations that have revisited the archetypical form of the tea cup, the idea of still-life with ceramics, or the utilitarian ceramic object. There is a modernist flavour in the manner he arranges mis-matched halves of bottle-like forms. Though they lend some verisimilitude to what we perceive as vases or pots, the sculptures are solid forms firmly denying any function as “containers”. His forms challenge the viewer to break their own conditioning to read patterns and meanings they have been habituated to and instead nudges one towards alternative mythologies of those objects.

While there are several common undercurrents one would discover in the works of the artists presented in this show, the larger vision of Gallery Ark is to celebrate the diversity of practices and versatility of clay in the hands of some of our best artists. Gujarat lies within the peripheries of the ancient Indus Valley civilization and archaeological sites here have revealed samples of pottery traditions almost 4000 year old. This show must equally be seen as a tribute to this long history we live with and carry forward.