Born in 1953 in Nathdwara, Lalit Sharma inherited his unique artistic skills from his father Ghanshyam Sharma and earned a Master’s Degree in Drawing and Painting from the University of Udaipur. His work has been a part of numerous collections including the Taj Group of Hotels in Mumbai, New Library in Cardiff, Jawahar Kala Kendra and LKA in Jaipur. He has been honoured with Rajasthan Lalit Kala Academy Award thrice, AIFACS Award, Tulika Kalakar Parishad Award and Udaipur Gold Medal. He was also an artist in residence in the Wales, UK.

His work is rooted in the Indian miniature painting tradition but his uniqueness shines due to subtle variations of forms having modernist sensibilities. Architectural spaces including buildings, palaces of Rajasthan and especially his beloved city Udaipur and its lakes, streets make a regular appearance in his artworks. 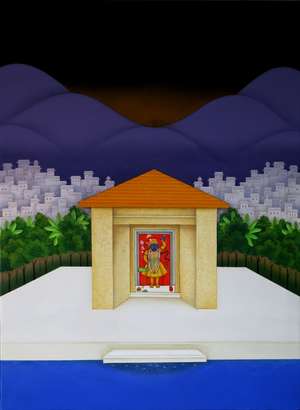 Shrinathji in My City (1), Oil on canvas 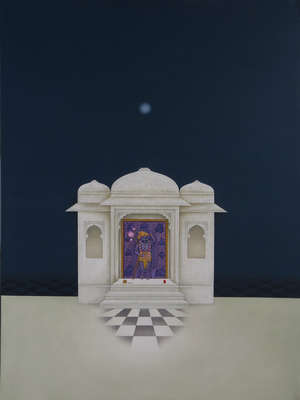 Shrinathji in My City (2), Oil on canvas