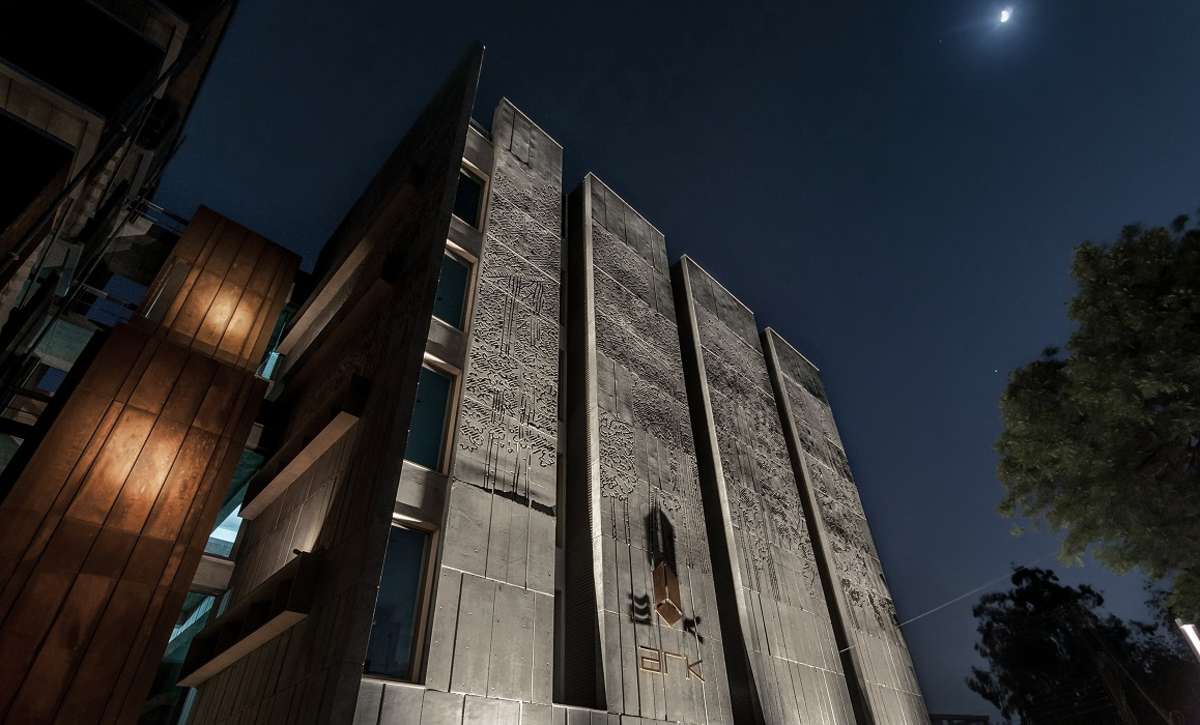 At first glance, Ark has two characteristics that immediately stand out to us – the distinct architecture and its integration with art at a fundamental level, instead of serving as a mere surface where art is displayed. The building has a presence in itself, what with the tall bar-graph-like facade, the amalgamation of bold materials like bright orange corten steel boxes suspended above the atrium, and serpentine stairways that do not shy away. What makes the building truly unique however, is the evident trust it has put in artists who have quite literally used the building as their canvas. It is impossible to miss Walter D’Souza’s banyan tree etched into the facade, the white screen that towers over the atrium, or stencil drawings embedded in the flooring at surprise intervals.

Here, art and architecture seem to marry in a rare balance that bolsters them both. On closer observation, one comes to realize that this is not just an aesthetic partnership but also a functional one. The open-to-sky staircase at the very heart of the building, leading to the basement car-park from the atrium, is a good example; while the circular staircase is remarkable in its architecture, with no supporting columns in its entire length, its copper railing is designed by Walter D’Souza. Walter also collaborated with the architect on the Gabion wall in the basement, by carefully placing each stone in its outermost layer himself, to create an art installation spanning across 20,000 sq. ft.

It has been a little over a year since Ark opened, first with the ground floor art gallery, and finally with the 4th-floor Rubamin office (its parent company) a few short months ago, when we ‘moved in’ full-time. Not only a fresh start but a giant leap in terms of quality from our previous office, this comes loaded with excitement, renewed energy and loftier goals. One is struck by the versatility of an office space that can tell so many stories. You walk into a modern black and white office with a tad bit of corten steel and wood finish. Mrugen Rathod’s 70 ft. ’Avataran’ floats overhead, adding color and softness to the space . Lit from within, the appliquéd structure has crocodile motifs which as meant to symbolize Vadodara and its architectural evolution. It also recalls Vishwamitri river flowing through the city in a narrative parallel to the Biblical floods (relevant to the building’s name and purpose). The other wing showcases a very different interpretation of the Great Flood by Kaushal Gond; this one is painted on the wall in black and white in tribal Indian Gond style. A level above, the cafeteria has a large indoor balcony in the shape of an unfinished Ark, which sits above the workspaces in this wing.

In the early days of construction, I remember once asking Walter what he thinks the impact of his art will be on the building, or at least what he intends, and he promptly replied, “I want it to be an experience. This experience will be different for everyone. Some will only notice the obvious, others will notice the smaller details, but either way, art will lend the building many layers.” We notice our colleagues proudly invite their friends and family to see the building, we have seen unassuming guests from the Ark Café downstairs looking around, as well as more perceptive artists or gallery visitors. Some are overwhelmed by the scale, some shocked when they learn that the glossy-pink basement, complete with several carved banyan tree columns and Walter’s Gabion wall, is actually a car-park. Casual iPhone photos taken by a Rubamin colleague recently, even managed to surprise the architect. Indeed, as Walter said, every experience is different and for us regular visitors, it is ever-evolving, but it is always moving. Perhaps the building’s architecture has given art an opportunity to serve its purpose on a much higher magnitude. Walking in to work every day is no longer just about being surrounded by art, but rather about being welcomed by it and experiencing it not only in the office space but now in the very essence of our organization, much like the building’s architecture.